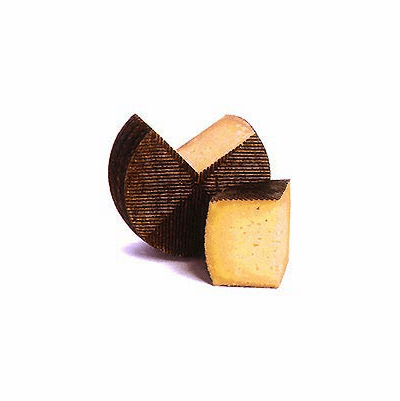 See all other from Cheese | Quesos
Manchego cheese is the most important and well-known sheeps milk cheese in Spain. The shape of this cheese is very characteristic and defined, due to the traditional use of esparto grass molds which imprints a zigzag pattern along the side of the cheese. The small wooden boards used for pressing the cheese also imprints the typical wheat ear pattern on the top and bottom.

This rustic molds are used outside of La Mancha as well. Thus, there are other Spanish sheep's milk cheese with similar shape and markings, known commonly as "Manchego style" cheese.

The true Manchego cheese, however, is made only from whole milk of the Manchega sheep raised in the "La Mancha" region. This region is a vast high plateau, more than 600 meters above sea level, which extends from east to west and north to south, adjoining the provinces of Toledo, Cuenca, Ciudad Real and Albacete, all in the Castile-La Mancha Autonomous Region southeast of Madrid.

Manchego cheese has a long historic and literary tradition, as it was mentioned by Cervantes in the legendary "Don Quixote of La Mancha".